Curious to know more about this site, other than what is said on the index page and Questions & Answers page... Here is a little background information about this site.

I always felt Jem is as good as it gets. Perhaps you felt like that too with Jem, or something else? For me, Jem was always the coolest of all cartoons. It had wellwritten stories with action, clever drama, realistic characters with complex personalities, great role models and messages of friendship. And long before superstars like Beyonce and Nicki Minaj (which are fans of Jem), Jem characters had outrageous hairstyles and colors, the most imaginative fashions, fantastic music sung by fantastic singers, along with creative animated music videos, and beautiful animation.

The combination of getting all of those ingredients right, is of course... truly outr...! In my opinion there's never been a greater bunch of people come together and work their talent. Everyone from the toy designers, writers, song writers, voices, animators, directors, producers, and everyone inbetween. 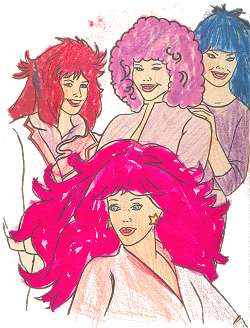 My fandom of Jem started when Jem was originally available as dolls and a cartoon in the 80's.

Firstly I prefer the cartoon, unlike many Jem fans who perhaps prefer the dolls. But the cartoon is what gave life to the dolls. I remember the first time I saw a Jem VHS tape in a video rental store (in fact the rental store was still there until a few years ago), I picked up the video and looked at the back and thought it was the strangest looking bunch I had seen with those hair colors. Can't remember what my first reaction watching an episode was, but suddenly I was a big fan. I only had access to 11 early episodes on video though, and for many years that's basically all I knew about the cartoon. I remember when I was little, I used to copy the music videos from the VHS-tapes into tapes with only music videos.

Later I was able to catch a few episodes via cable TV. I would try to memorize the songs (although I couldn't speak English at the time) by singing them over and over, incase I would never hear them again. Who knew back then that DVD collections would eventually be released! I remember two of the songs were "How You Play The Game" and "Perfect Match". Some scenes stuck with me until I was a teenager and got the chance to see how my memories compared to reality, and learn about all the new characters. And in my opinion the cartoon, the dolls and the entire concept of Jem definitely aged well! 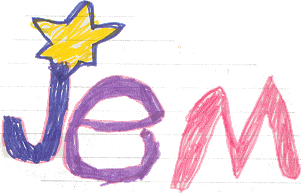 I also collected the dolls when they were available in stores. I had 9 dolls, the Star Stage, and several fashions. You can understand how lucky I was! I loved the haircolors and rock-themed fashions, those cool guitars, and I played the cassettes a lot! Very few other Jem products were available in the toystores nearby, but I had some coloring books I loved coloring, for better or worse (see above picture).

As the Jem line was cancelled, and as I had no way of finding more episodes or collectibles, I had a hiatus for a while. But I never forgot Jem. I've even found old mixed tapes of mine from during my teen years, with songs by real life singers aswell as Jem. And I always kept my original dolls even though my cats had chewed some of their feet badly. And when I got back into Jem, I even brought tapes to high school and got the teachers to play them as background music for art class, and Spanish versions of songs for Spanish class. If you ever played a Jem song for a friend, you'll know how reactions are kinda mixed when they learn it's from a cartoon.

Today I still love the dolls. I don't play with dolls, barely ever did, but I don't have a thing about not being able to collect dolls. I consider them as collectibles and pieces of art. Besides, who's to say dolls are not for adults? Most people have a favorite cartoon, collectible or playful activity these days.

I also collect certain Jem animation art and random items like erasers, comics etc. I love seeing rare collectibles I never saw before! So be sure to contact me if you have something that isn't pictured on this site!

I may not have the biggest collection of Jem in the world. But at least I'm showing it online.

Jem was one of the first things I searched for when I got internet access in the mid 90's. Jem had just been rediscovered by fans on the internet and a small community was taking shape. I was among the youngest fans and mostly a silent bystander and collector. But soon I started creating my site.

Rock Jem started out as "Universal Appeal" in 1997, on a free webhost called Angelfire. Infact the oldest trace of that website, that still remains online at it's original URL, is a picture taken with a traditional camera off my TV screen of Rio and the Holograms, dated June 16, 1997. The original idea of this site was to spread info about this great cartoon, upload some pictures and make features that weren't available anywhere else. Those are still goals for this site, aswell as relying on information rather than visual effects, and supporting official products for the brand to one day return and show its full potential. And hopefully this site along with the amount of visitors, is proof that there's an interest in Jem.

But incase you came to this site first, this is not the only Jem site on the internet. In fact, Jem fans have taken their time, energy and money, and done the most amazing projects! And now Jem is working her way back as we speak! Re-runs on TV, DVD releases, live-action movie, new comic, the new commemorative collectors doll line, and exclusive jewelries collection, Funko Pop figures, action figures, among more products and happenings. Jem fans are even dreaming of a new doll line in stores and a new cartoon on TV, with as many of the original people involved as possible.

Keeping up with it all on this site is tough! And on top of that, I have some additional obstacles to overcome. I don't own a single expensive computer program to write codes nor design images. I rely on old programs and write coding completely by hand. But the upside is that it requires a lot more imagination and the coding is more correct according to the W3C standard. My scanner is from the 90's, but it works fantastically. And I'm writing in my second language English (I hope it's not too obvious).

Making a site like this, means a lot of text-writing, HTML-coding, CSS-coding, scanning of collectibles, photographing, picture editing, designing logos, uploading, correcting errors, updating links, keeping the domain running, keeping up with interactive features, and always keeping up with rare collectibles that show up and new ones released, among other news. I don't think most people realize how hard this can be. At times I can't keep up.

I have so many projects on this site running at once that I want to finish or update. And I have so many other things I have to do. Often when I do have time to spare, I'm so tired it's a pain. But instead of giving up, I work on other features that I feel I have energy for at the time.

When this site was smaller, it was often overlooked. But already in the 90's it grew alot. The more this site has grown, the more people expect of it. For better or worse. It's hard at times to keep up with everything. And some people don't just appreciate that this site is free to enjoy. Every now and then I find my texts and images are duplicated elsewhere on the internet, without a mention of this site. And it's not easy to keep everyone happy, while making the site how I want it to be, how I see Jem.

So what do I get out of making this site? It has no advertising at all, and no shop, which means I earn nothing on the site. I don't ask for money via kickstarter or a PayPal link. I'm not looking for recognition in form of being called a Jem expert. Nor do I seek some kind of position among Jem fans. I don't make a lot of noise outside this site. I have a regular voice like everyone else, and I'm just crazy about Jem!

As difficult as it can be to make a site, there are a lot of positive things:
- I'm happy to bring joy to others, people who discover or re-discover Jem through this site, and how we all bring attention to Jem with new sites, features, projects, and social media posts.
- Jem has an amazing effect on me to get forward in so many ways. It challenges me to create. Infact the site is a great motivation to learn things, like website building and image design, and Jem is a very inspiring cartoon!
- All the people who understand it's hard work and appreciate it. A nice message can mean so much!
- All the amazing people who share info about Jem. And especially people who originally worked on Jem who have been so friendly and given me such an amazing insight on what it was like to make Jem happen.
- Seeing the many other great Jem sites that link to this site, even major culture giants like Vanity Fair writing about it, is an honor!
- The amazing amount of visitors, which in some periods is the only way to tell that people appreciate the site, or atleast have some kind of use for it.

To all the people who contributed to this site. Your contributions are very appreciated! Even if I sometimes have a hard time keeping up with updating the site and replying to mails and staying in contact, you give me such joy and energy to keep the site going. Writing your name next to your contribution seems to me like it's not enough, so let me assure you again how much it means to me and a lot of people that you decided to give of your time and energy for others to enjoy.

I also appreciate the early great Jem sites, which are all gone today, that inspired the entire Jem community. I mention some of them on the page Fansite History.

This site already in the 90's had big features with international information, retakes info, show credits, interactive features, and a huge Jem link collection. Today Rock Jem has over 320 pages filled with content, and many exclusive features. The goal is still to make unique content, and to make as informative and correct content for its visitors as possible, the best images I can make according to resolution and quality, to be flexible about updating just about any part of the site at any time, and to present Jem in all it's outrageousness.

Most importantly... I think Jem-collecting and fanhood should be fun and friendly. Just visit a site whenever you need info. Discuss something if you feel like it. Trade collectibles. I just want to spread info about Jem and act in the good spirit of Jem. And oh, of course see high numbers of visitors on the counters, which hopefully means you enjoy the site. :)

Some facts about this site

Read the Credits page to find out more about the people who made Jem.

Visit Media material if you want help creating your own Jem content.